At the request of Whoster 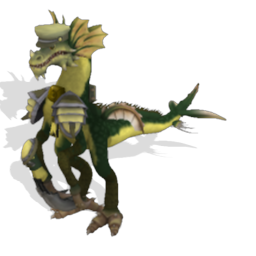 Empire Name: Vil-Nolwikkan Greater Dominion , AKA Sos Konganaat
Creator: ThePrussianCompy
Sporecast: Progressing.
Species Name: Vhyre Nokkra
Homeworld: Lanipus
Size: The Vil-Nolwikkans have a large empire at the inner galaxy. They border the Dominion, which is in the southern galaxy, according to them. Along with owning many planets near to or adjacent to the core, their empire spans halfway up the first arm.
Biology: Vil-Nolwikkans are very dinosaur-like. They stand upright, but they also have a six-foot long tail, with a fleshy crest running down its spine. One of the strangest features this creature has is the fact that it doesn’t have proper hands. Instead, they have large claws on their arms. Dispire not having opposable thumbs, early Nolwikkans lived easily, clutching items in their mouth, and sometimes in between the claw and arm. Nolwikkans are extremely smart, which also progressed their development in a world without arms.
Religion: Vil-Nolwikkans did not believe a god early on. During the civilization stage, religious nations arose, but were eventually crushed by the nation of Kzechon, which eventually unified Lanipus. However, one could say that the Nolwikkans worshipped the art of war. They practiced fighting from birth, and usually joined the military by age fourteen. Law states that they are unable to leave the army until age 20, where they could choose to stay or pursue other jobs. Around 40% of Nolwikkans stay in the military, while others leave. Despite the number, however, tens of millions of Nolwikkans still willingly serve in the military.
Culture: A Vil-Nolwikkan citizen’s common favorite hobbies include bonding with others, treating the alien slaves like dirt, eating, reading, and using their technology to their own advantage. By that, I mean they are selfish and hateful to everyone but their own kind, with very few exceptions. Nolwikkans are carnivores, and commonly eat muscly, lean, wild animals. Considered barbarians by aliens, Nolwikkans are easily offended by anti-Lanipans.
Nolwikkans rarely dress, and when they do it’s usually made for the claws, shoulders, or heads. They simply don’t have a need for clothing, except in battle.
Nolwikkans easily bond with each other. Often they could get engaged in huge conversations, usually through a walk in the woods, or exploring Lanipus’ famous Kingdom Waterfalls, in which many Nolwikkans camp, hunt, or even bathe in the water.
Military: All of the Vil-Nolwikkan military, with the exceptions of the huge starships, are divided into regiments

-The Slave Regiment consists entirely of captured enemy aliens. They never go into battle, except as distractions. Usually they are trained in the ways of the Vil-Nolwik.

-The Grey Regiment consists mostly of rookie Nolwikkans and captured aliens. They almost never go out on missions of their own. Usually, they are either used as distractions or set behind the main army, taking out enemies from afar.

-The Indigo Regiment consists of trusted aliens and Nolwikkans. The only thing deferring this regiment from the Greys is the fact that generals are more interested in keeping Indigo soldiers alive.

-The Yellow Regiment consists of better-trained and better-armored Indigo soldiers.

-The Blood Regiment is the second best. Most elite soldiers consist in the Blood regiment. This regiment sometimes scouts the battlefield post-battle and picks off remaining enemies. But usually they are in the battle, in the front lines, Slicing up the stronger soldiers for the rest of the army to handle.

-The Dark Regiment consists of very specialized soldiers, and almost no aliens. All Nolwikkan captains are members of the Dark Regiment. Other types of the dark regiment include missile carriers, “Slashers,” and “Barbarians”. (Slashers are melee warriors, while Barbarians are completely covered in armor, usually destroying enemies with little to no effort.)

This form of military also works in space and in water. There are Dark and Blood regiment ships and boats out there.
Government: Vil-Nolwikks have a kingdom. The oldest son or daughter of the king or queen is the heir to the throne. Unfortunately, this has led to violence among siblings. Several centuries ago, it was ruled that whoever killed the heir, whether it be assassin or sibling, would be tortured and executed in public. As expected, not much violence came afterwords.

The current ruler is Archlord Reskullus.
Style: Generals prefer an “orderly swarming style.” Regiments are in their own groups and cooperate with each other to give another regiment an advantage. One time a contest was held in the middle of a serious battle, for who could weaken the enemies enough for the Indigos to move in. The Yellow Regiment, surprisingly, won.